Ceiling fans installed by a licensed electrician in Batemans Bay

Summer is here, get ready for the hot days early in the season. If you live in Batemans Bay it’s an ideal time to book your ceiling fan installation with South Coast Electrical Solutions before the summer heat.

Ceiling fans must be installed by a licensed electrician for safety and for your ceiling fans warranty.

South Cost Electrical Solutions can give you a quote to install ceiling fans in your property in Batemans Bay, call and speak to one of our friendly staff today. When considering buying ceiling fans there are a few options, please read below. We have also included some energy efficient running tips for using your ceiling fan with your air-condition for the hot weather. 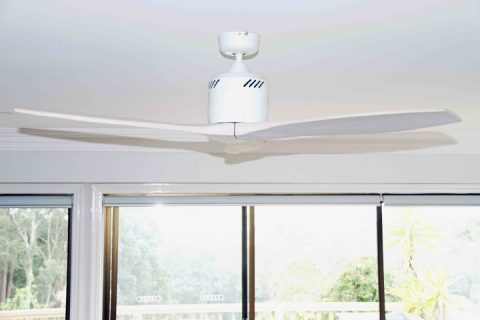 If you are looking to buy a ceiling fan in your property you will need to consider a few options.

With so many designs on the market to choose from you could feel a bit overwhelmed with choice. From futuristic designs, ceiling fans with curved blades, colour choice and unique styles. Then you will have to decide on the number fan blades, if you want a DC or AC fan motor, with or without light, and timber fan blades or metal fan blades.

Other fan option when buying are:

The difference between DC and AC motors is DC ceiling fan motors use less energy than standard AC ceiling fans and are extremely quieter to run, they have more speed options and a reverse function on the remote. DC fans, when compared to AC fans in price are generally more expensive as DC fans are still relatively new to the market. If you are choosing an AC ceiling fan you will find there is more choice on the market compared to the DC fan range. AC fans can be controlled from wall control. AC fans cost a little more to run compared to the DC fan motor, however are still extremely energy efficient in terms of cooling costs.

Increased air speed from the ceiling fan takes advantage of the body’s natural cooling process and can make people feel significantly cooler by running them together. Because the air accelerates the rate at which perspiration evaporates from the skin, this can make the room feel like 24°C even if the thermostat is set at 27°C

When you use this method of cooling by running the ceiling fan and air-conditioner together you will be able to increase the thermostat by several degrees and the body won’t notice that the ambient temperature in the room has changed because it is actually the same level of comfort has been maintained. Ceiling fan are great in summer as they move the air around and can make you feel cooler from the fan breeze by making the air temperature more comfortable.

The most a ceiling fan will cost to run is approximately 3 cents per hour, which is the same cost as running as a 60 watt light globe. Ceiling fans are also efficient in keeping your air-condition running costs low when you use them together, if used correctly it will could reduce your air-conditioner power costs.

Get ready for the hot summer weather and book your ceiling fan installation today. 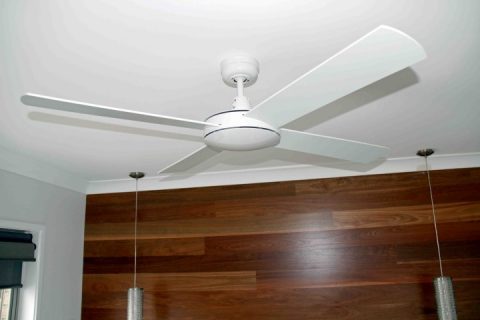 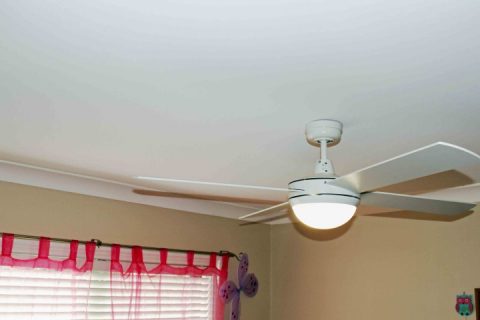